How is FMRI Used?

Hannah Devlin explains how fMRI is used and answers some common criticisms of fMRI. With additional contributions by Stuart Clare and Heidi Johansen-Berg.

Who works in an FMRI Laboratory?

Neuroimaging is a highly interdisciplinary field, typically bringing together scientists with a wide range of backgrounds.

The Physics groups focus on designing new ways of using the scanner to acquire data (pulse sequence design), working out what an FMRI measurement corresponds to physically and biophysical modelling.

One of the key roles of the Analysis groups has been developing FMRIB’s in-house software library FSL for analysing FMRI data. These groups continue work to optimise techniques for the analysis of both structural and functional imaging.

The many basic and clinical Neuroscience groups use neuroimaging as a tool to explore how the brain works. Some areas of interest are pain, disease, language, decision-making and development.

Clinical and Commercial Use FMRI now has a small but growing role in clinical neuroimaging. It is used in pre-surgical planning to localise brain function. There is also potential for clinical FMRI in applications including presymptomatic diagnosis, drug development, individualisation of therapies and understanding functional brain disorders. Early studies also suggest that FMRI has the potential to be used as bio-feedback for conditions such as chronic pain.

There have been several early ventures to capitalise on FMRI. Two companies have been setup in North America offering lie detection services using FMRI. There are also several neuromarketing companies using FMRI to gain insights into consumer thought and behaviour.

Computed tomography (CT) scanning builds up a picture of the brain based on the differential absorption of X-rays. During a CT scan the subject lies on a table that slides in and out of a hollow, cylindrical apparatus. An x-ray source rides on a ring around the inside of the tube, with its beam aimed at the subjects head. After passing through the head, the beam is sampled by one of the many detectors that line the machine’s circumference. Images made using x-rays depend on the absorption of the beam by the tissue it passes through. Bone and hard tissue absorb x-rays well, air and water absorb very little and soft tissue is somewhere in between. Thus, CT scans reveal the gross features of the brain but do not resolve its structure well. 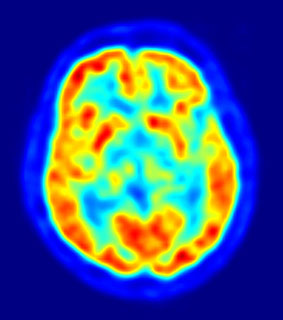 Positron Emission Tomography (PET) uses trace amounts of short-lived radioactive material to map functional processes in the brain. When the material undergoes radioactive decay a positron is emitted, which can be picked up be the detector. Areas of high radioactivity are associated with brain activity.

Electroencephalography (EEG) is the measurement of the electrical activity of the brain by recording from electrodes placed on the scalp. The resulting traces are known as an electroencephalogram (EEG) and represent an electrical signal from a large number of neurons. EEGs are frequently used in experimentation because the process is non-invasive to the research subject. The EEG is capable of detecting changes in electrical activity in the brain on a millisecond-level. It is one of the few techniques available that has such high temporal resolution.

Magnetoencephalography (MEG) is an imaging technique used to measure the magnetic fields produced by electrical activity in the brain via extremely sensitive devices known as SQUIDs. These measurements are commonly used in both research and clinical settings. There are many uses for the MEG, including assisting surgeons in localizing a pathology, assisting researchers in determining the function of various parts of the brain, neurofeedback, and others.

Near infrared spectroscopy is an optical technique for measuring blood oxygenation in the brain. It works by shining light in the near infrared part of the spectrum (700-900nm) through the skull and detecting how much the remerging light is attenuated. How much the light is attenuated depends on blood oxygenation and thus NIRS can provide an indirect measure of brain activity.