Hannah Devlin describes how fMRI works and how it is used to discover how the brain works. With additional contributions by Stuart Clare and Irene Tracey. 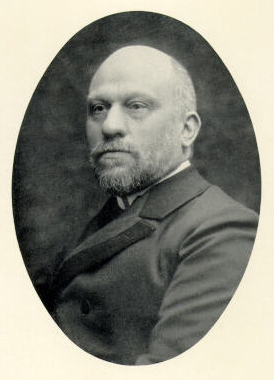 FMRI is one of the most recently developed forms of neuroimaging but the idea underpinning the technique - inferring brain activity by measuring changes in blood flow - is not new. The following account of an experiment performed by the Italian scientist Angelo Mosso (left) can be found in William James’ The Principles of Psychology, published in 1890:

'The subject to be observed lay on a delicately balanced table which could tip downwards either at the head or the foot if the weight of either end were increased. The moment emotional or intellectual activity began in the subject, down went the balance at the head-end, in consequence of the redistribution of blood in his system…'

The reported success of this early experiment can only have been wishful thinking on the investigators behalf. But the suggestion that blood flow is coupled to neural activity was insightful. In 1890 the prevailing view was that since the brain is encased by the skull, local increases in blood flow and volume would be impossible. It was thought instead that any changes in blood flow were caused by systemic changes in blood pressure or cardiac output. 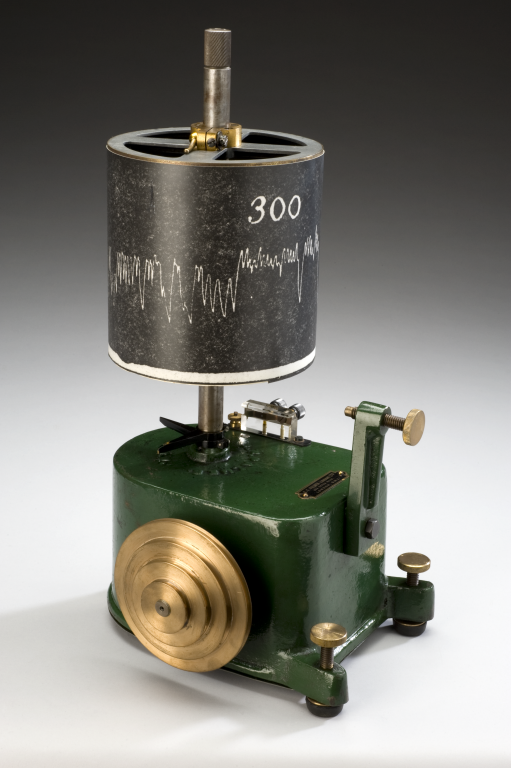 Toward the end of the nineteenth century, Charles S. Roy and Charles S. Sherrington provided the first evidence supporting a coupling between energy metabolism and blood flow in the brain. In their experiments, a monitoring device was placed on the brain surface of anesthetized dogs, which measured fluctuations in blood volume (Sherrington Starling kymograph, left). They showed that blood volume (and presumably flow) does change locally in the brain. However it was still unclear whether the brain itself was responsible for mediating these changes.

It was not until 1948 in a seminal experiment measuring oxygen metabolism and blood flow in the brain that Seymour Kety and Carl Schmidt confirmed that blood flow in the brain is regionally regulated by the brain itself. They demonstrated that when neurons use more oxygen, chemical signals cause nearby blood vessels to dilate. The increase in vascular volume leads to a local increase in blood flow. At the time of these publications Kety and Schmidt were considered vascular physiologists more than brain scientists. Nevertheless the ability to measure CBF, a proven correlate of brain metabolism, opened up the remarkable possibility of studying brain function in humans.

The development of FMRI in the 1990s, generally credited to Seiji Ogawa and Ken Kwong, is the latest in long line of innovations, including positron emission tomography (PET) and near infrared spectroscopy (NIRS), which use blood flow and oxygen metabolism to infer brain activity. As a brain imaging technique FMRI has several significant advantages:

The attractions of FMRI have made it a popular tool for imaging normal brain function – especially for psychologists. Over the last decade it has provided new insight to the investigation of how memories are formed, language, pain, learning and emotion to name but a few areas of research. FMRI is also being applied in clinical and commercial settings. 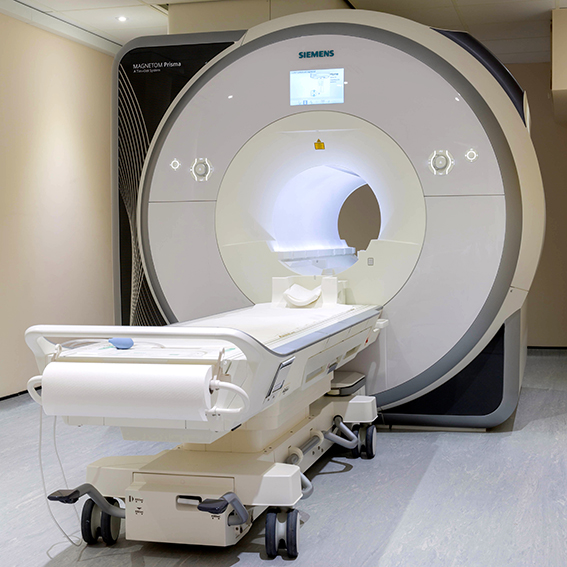 The cylindrical tube of an MRI scanner houses a very powerful electro-magnet. A typical research scanner (such as the FMRIB Centre scanner) has a field strength of 3 teslas (T), about 50,000 times greater than the Earth’s field. The magnetic field inside the scanner affects the magnetic nuclei of atoms. Normally atomic nuclei are randomly oriented but under the influence of a magnetic field the nuclei become aligned with the direction of the field. The stronger the field the greater the degree of alignment. When pointing in the same direction, the tiny magnetic signals from individual nuclei add up coherently resulting in a signal that is large enough to measure. In FMRI it is the magnetic signal from hydrogen nuclei in water (H2O) that is detected. The key to MRI is that the signal from hydrogen nuclei varies in strength depending on the surroundings. This provides a means of discriminating between grey matter, white matter and cerebral spinal fluid in structural images of the brain.

Oxygen is delivered to neurons by haemoglobin in capillary red blood cells. When neuronal activity increases there is an increased demand for oxygen and the local response is an increase in blood flow to regions of increased neural activity. 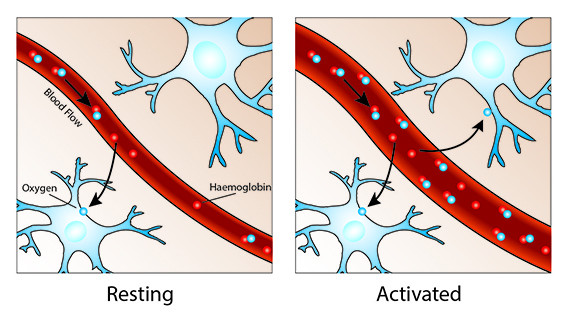 One point to note is the direction of oxygenation change with increased activity. You might expect blood oxygenation to decrease with activation, but the reality is a little more complex. There is a momentary decrease in blood oxygenation immediately after neural activity increases, known as the “initial dip” in the haemodynamic response. This is followed by a period where the blood flow increases, not just to a level where oxygen demand is met, but overcompensating for the increased demand. This means the blood oxygenation actually increases following neural activation. The blood flow peaks after around 6 seconds and then falls back to baseline, often accompanied by a “post-stimulus undershoot”. 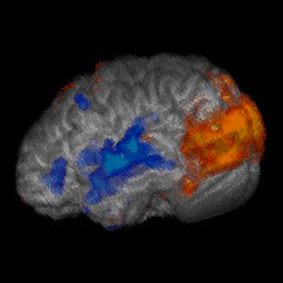 The image shown is the result of the simplest kind of FMRI experiment. While lying in the MRI scanner the subject watched a screen which alternated between showing a visual stimulus and being dark every 30 second. Meanwhile the MRI scanner tracked the signal throughout the brain. In brain areas responding to the visual stimulus you would expect the signal to go up and down as the stimulus is turned on and off, albeit blurred slightly by the delay in the blood flow response. The ‘activity’ in a voxel is defined as how closely the time-course of the signal from that voxel matches the expected time-course. Voxels whose signal corresponds tightly are given a high activation score, voxels showing no correlation have a low score and voxels showing the opposite (deactivation) are given a negative score. These can then be translated into activation maps.