Welcome to the Becker Group!

Interestingly, the cerebellum has emerged as one of the key brain areas affected in autism spectrum disorder. However, the molecular mechanisms linking cerebellar function to autism remain largely unknown. We are addressing this important question by investigating the role of autism genes in the development and function of the cerebellum by integrating experimental developmental neurobiology and computational analyses.  Our recent work has shown that a subset of autism genes is highly enriched in developing Purkinje cells.

Together, our work provides a more rigorous understanding of the genes and pathways behind these diseases. We hope that our findings will ultimately help to inspire improved clinical treatments. Four people standing in a green field making shapes with their arms. We are a young, international and enthusiastic group. Enquiries from motivated and talented students and post-docs to discuss available research projects and funding possibilities are always welcome. Get in touch

in2science
Our lab is proud to be part of the fantastic in2science programme that provides research placements for students from disadvantaged backgrounds.

Empowered women
Esther was one of the invited keynote speakers at the Empowered Women event in April 2014 that was hosted by the Charity Wishful Smiles together with Barry Gardiner MP at the Houses of Parliament. 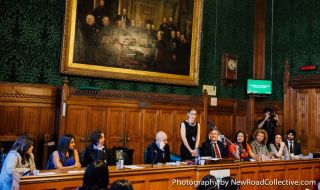 January 2020: Welcome to Lizzy Apsley, our first BBSRC DTP iCASE student!
November 2019: Congratulations to post-doc Sam, who has won one of the poster prizes at the win one of the poster prizes at the International Ataxia Research Conference for his great work on modelling human cerebellar development using organoids
July 2019: Welcome to Max van Essen, who will do his DPhil in the lab supported by a clinical fellowship from the CRUK Oxford Centre
May 2019: Welcome to OXION rotation student Jodie Collingridge!
February 2019: Congratulations to Friederike for passing her DPhil viva!
January 2019: Our cerebellar differentiation paper has been voted "Best 2018 Paper" in Cerebellum
Nov/Dec 2018: Congratulations to the first batch of graduates from our lab, Dr. Maggie Wong and Dr. Liam Argent!
August 2018: We are excited to host in2science student Emma Davies for a placement in our group
May 2018: Alaa Baazaoui, MSc project student from Cologne, joins our group. Welcome!
April 2018: Welcome to DTP PhD student Elise Padbury, who is doing a joined project with Dave Carter's group at Oxford Brookes and us
January 2018:  Welcome to DTP rotation student Melissa Grant-Hänni!
October 2017:  Great article by Lauren on iPSC-based models of neurodegenerative diseases: promises and pitfalls in this term's issue of Phenotype
September 2017:  Welcome to Mimi Prickett, who will carry out her Biochemistry Part II project in our group